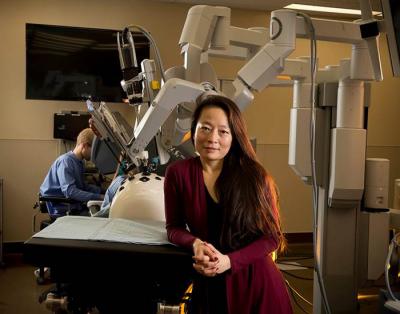 Professor Cao is also cross-appointed in the Department of Mechanical and Materials Engineering as well as in the Department of Surgery in the Boonshoft School of Medicine at WSU. She is an expert in the field of human factors engineering (HFE) in medical systems, especially in the design and application of enabling technology for minimally invasive surgery and training (such as virtual reality simulation, sensory augmentation, and robotics). She is a recipient of an NSF Career Award from the National Science Foundation, and has served as PI or co-PI on more than $15 million of funded research, including multi-institutional grants supported by National Institute of Health (NIH).

Professor Cao has actively cultivated international research collaborations while serving as a Research Chair in France supported by the Regional Research Council of the Loire Region in France in 2010-2011, and as a Distinguished Visiting Scientist at the Australian E-Health Research Centre at CSIRO (Commonwealth Scientific and Industrial Research Organisation) in Brisbane, Australia in 2013.