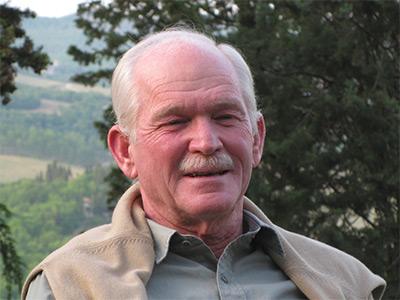 Roger Kintzel graduated from Wright State University’s third graduating class in 1970 with a Bachelor of Arts degree in English and a budding but ill-defined interest in writing and the news business. His first job, at the Xenia Daily Gazette, convinced him to be a journalist. After receiving a Master of Arts degree in journalism from the University of Missouri–Columbia in 1973, Roger embarked on a career as a journalist, an editor, and finally as publisher of several newspapers.

The creation of Wright State was fortuitous for Roger, who had lived in nearby Yellow Springs for most of his life. The proximity of the campus, an ample offering of night courses, relatively low cost, and scholarship aid made part-time college attendance possible. Matriculation, supported by part-time jobs and the G.I. Bill, followed quickly.

His first job after he finished his studies at the University of Missouri was with the Richmond News-Leader in Richmond, VA. Roger’s interest in writing business news led him, in 1979, to join Cox Enterprises as business editor at the Dayton Journal-Herald, which was then the morning publication of Dayton Newspapers, the publisher of the Dayton Daily News.

He lives in Austin, TX, with his wife of 41 years, Lee, and near their two daughters and three grandchildren.

K. T. Arasu, Ph.D., is a world-class scholar who has led pioneering research projects but can still explain complex mathematical concepts to even the most baffled undergraduate.

“Despite his mastery of the material, Arasu was never condescending to students; therefore, we were not afraid to ask questions,” said current Ph.D. candidate Alex Gutman, who earned degrees from Wright State in 2007 and 2009. “The behind-the scenes stresses of academia never seemed to compromise his teaching.”

Wright State added Arasu to its faculty roster in 1983. He has since obtained more than $1.5 million in research funding, published more than 100 papers and technical reports, spoken at nearly 120 professional events, and devoted hundreds of hours over the last four summers to offering contemporary instruction to high school teachers.

Mathematicians, engineers, and statisticians from around the world have collaborated with Arasu, but most will credit him as the driving force behind important projects.

College of Science and Mathematics Professor Emeritus Dan Voss noted that Arasu has become a significant figure in the mathematics of communications engineering and signal processing research.

Arasu has provided extraordinary research opportunities to undergraduate and graduate students, supporting more than 100 of them, primarily through grants, since 1990.