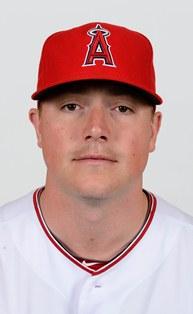 Change in delivery propelled Joe Smith to the Big Leagues. Former Wright State pitcher has had successful career with the Mets, Indians and now Angels.

Joe Smith had arm surgery and didn’t pitch as a senior at Amelia High in Ohio. He then attended Wright State without a scholarship and was cut as a freshman.

“I knew I just needed some time. I needed a year to get stronger and get my arm back in shape,” said right-hander Smith, who also played basketball in high school.

Smith came back and pitched WSU as a redshirt sophomore and in 2005 as a junior he changed his delivery to a sidearm angle, which can be tough on right-handed hitters.

He was named the Horizon League pitcher of the year as a junior and in 2006 was drafted in the third round by the New York Mets, where he began a rapid rise to the major leagues.

Smith pitched in just 27 games in the minor leagues before he made the Opening Day roster of the Mets in 2007. After two years with the Mets and five with the Indians, Smith is now in his first season as a key reliever in the bullpen for the Los Angeles Angels.

“It is awesome,” said Smith, 30, sitting by his locker during a recent road trip to Washington to face the Nationals. “We have a good group of guys here. It is really easy going, kind of the West Coast vibe, which is not a bad thing with the pressures of the outside world.”

He was a witness to baseball history April 22 as teammate Albert Pujols hit two home runs against the Washington Nationals, giving him a career total of 500. Pujols became just the 26th player to ever reach the 500 home run mark. Another Angels’ teammate is outfielder Mike Trout, considered one of the best all-around players in the game.

But the life of a reliever in the big leagues can be stressful. It takes just one pitch late in the game to turn a possible victory into a loss and Smith many times pitches the eighth inning in a tight game.

Smith entered this season with 439 big league appearances as a reliever with a record of 27-16 and ERA of 2.97, which is very respectable. He had finished 83 games and had recorded three saves, all of them coming with the Indians in 2013.

He keeps in touch with his former WSU coach, Rob Cooper, now the head coach at Penn State.  Ross Oeder, a former WSU assistant coach, is a Penn State assistant under Cooper, who helped Smith change his delivery. Smith also returns to campus in the off-season and has attended Wright State baseball games at Cleveland State.

Smith said he has enjoyed working with Angels’ catcher Hank Conger and Chris Iannetta, both of whom have a lot of big league experience. Smith’s locker was situated between the two on a series in Washington. “I like being between them. You have to talk to them and work with them,” Smith said. “They may see things other (catchers) haven’t seen. Chris is quiet but he is a blast to talk to. I like being in between them.”

Smith said he will look back on his career once he hangs up his spikes. “Right now I am just having fun and trying to win a championship,” he said.

Editor’s note: David Driver is a free-lance writer who has covered pro baseball for 20 years. He can be reached at www.davidsdriver.com

A skilled and passionate teacher, Du goes above and beyond for her students and is committed to their success. A creative classroom instructor, she regularly supplements language education with cultural activities and advanced technology to help students gain confidence in their language skills.

Du joined the formal teaching staff in the College of Liberal Arts in 2008, after teaching for several years as an adjunct faculty member in the Department of Modern Languages.

She has played a critical role in the growth of the Chinese language program, a key component of the university’s Chinese studies minor, international studies major, and comparative politics graduate program. Enrollment in Chinese language courses during Du’s tenure has soared from 27 in 2007 to 104 in 2013.

“Haili has far exceeded our hopes, serving as a fantastic colleague and collaborator on Chinese studies specifically, and international studies more broadly, at Wright State and beyond,” said Laura Luehrman, director of the M.A. Program in International and Comparative Politics.

In addition, she has played a significant role in Wright State’s Dual Enrollment Program for high school students, serving as liaison between the university and Chinese instructors in local schools.