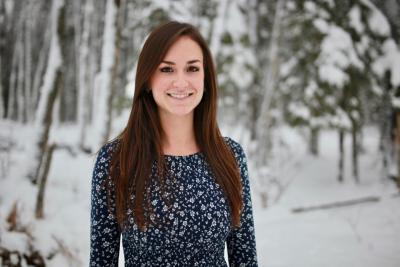 Mariah Vraniak ’14, ’15, a middle childhood education alumna, completed her student teaching just down the road from Wright State at Fairborn’s Baker Middle School, but her first job after graduation included flying nearly 4,000 miles to a remote village in Alaska.

“Honestly, I was kind of shocked at my choice. I went to a job fair thinking it would be a good mock interview,” Vraniak said. “I didn’t think that I’d end up moving to Alaska; but the adventure side of it, paired with the job opportunity in a different kind of location, really drew me.”

The adventure began at a school in a small village called Toksook Bay. Vraniak arrived on a bush plane and noted that there were few cars—or roads. During her one-year stint there, she became immersed in the local culture.

The village has a 100 percent Yupik (native Alaskan Eskimo) population, Vraniak says. She would take part in the traditional Eskimo dance called Yuraq three times a week. She even learned how to prepare meat from fish, seal, and beluga.

“I think it emphasized the fact that you’re able to teach better if you’re involved in your community. I got to understand them more,” Vraniak said.

Vraniak has been teaching in Nikiski, Alaska, for the last four years. During her first year at the school district, she authored its first curriculum for a computer programming course that remains in place today.

“I was only a second-year teacher and they gave me these huge opportunities in curriculum development, which felt unheard of to me,” Vraniak said.

She earned bachelor’s and master’s degrees in education from Wright State and credits her current position to Wright State’s education faculty and curriculum. Vraniak said she recalls senior lecturer Tracey Kramer’s lessons on building whole teaching units, and an assessment course taught by Nimisha Patel, Ph.D., as fundamental instruction she often relies on.