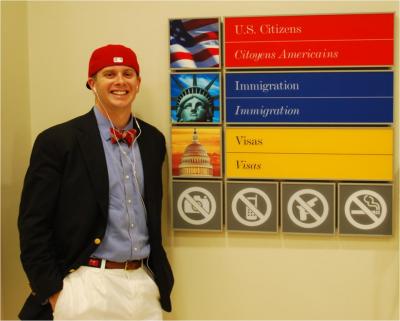 Tell us about yourself.

Since 2004, I’ve been married to a Cincinnati native, the former Jill Roszkowski. We don’t have any children yet, but we have a home in the DC suburbs (Fairfax, Va.). I’m a Foreign Service Officer with the U.S. Department of State, and my current assignment is as an International Affairs Fellow with the Council on Foreign Relations. In this capacity, I’m hosted by the National Basketball Association, where I’m spending the year working as part of their International Operations team at NBA headquarters in New York.

Tell us about your work history and your most recent work with the State Deptartment.
I’m a 2001 graduate of University of North Carolina at Chapel Hill where I was an Air Force ROTC cadet. From August 2001 to September 2007, I was an Air Force Public Affairs Officer. My first base was Wright-Patterson, which is how I ended up enrolling at Wright State. I am a veteran of Operation Iraqi Freedom, having served throughout the Middle East in 2003. I was also a member of Joint Task Force-Katrina, serving as a Public Affairs Officer on the Gulf Coast after the 2005 hurricane.

In 2007, I joined the State Department as a Public Affairs Specialist at the U.S. Mission to the United Nations in New York. After two years, I became a Foreign Service Officer. From 2009-10, I was the Special Assistant to Ambassador Richard Holbrooke, the Special Representative for Afghanistan and Pakistan. From 2011-13, I was the U.S. Consul to the Republic of the Congo at Embassy Brazzaville. From 2013-15, I was a Cultural Affairs Officer for the State Department’s Sports Diplomacy office.

At the NBA, I’m studying how the league engages international players, partners, and audiences as the global brand is grown. After the year-long fellowship, I will take this private-sector experience back to the U.S. Government (while hopefully providing State Department insight to the NBA).

What (career-wise) are you most proud of?
Representing and serving my country, whether in uniform or as a diplomat, is a tremendous honor and has been incredibly rewarding for the past 15 years.

Any professors that were influential to either your work or your life?
Dr. Laura Luehrmann was my thesis advisor and was incredibly patient with me through multiple deployments. I was also blessed with the support of Dr. Donna Schlagheck, Dr. Liam Anderson, and Dr. December Green.

What would you say to current Wright State students who are interested in a similar profession?
Take advantage of Wright State’s size. The professors are incredibly accessible and the intimate nature fostered by the school’s small class sizes and motived cohort created an environment that I found similar to a startup/incubator.

What does the future hold for you? What’s next?
I’ll finish up my year with the NBA in September and look forward to exploring possibilities around the world with the Department of State.