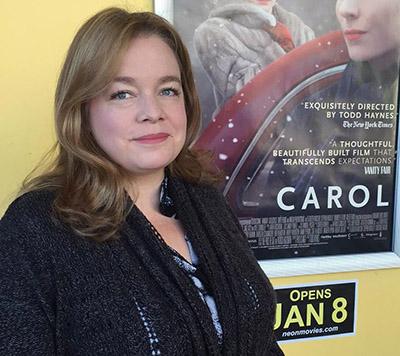 The Office of Alumni Relations recently spoke with alumna Karri O’Reilly '94 who graduated from Wright State with a degree in Motion Picture Production. O’Reilly has been involved with the production of more than 100 feature and short films, TV shows, and commercials.

She talks to us about her most recent film productions, "Goat," a film in competition at Sundance this year, and "Carol," a 2016 nominee for the Academy Award for Best Picture, and gives advice to aspiring Wright State students.

Tell us about yourself.
I live in Grafton Hill, having returned to Ohio from living in Los Angeles for over 10 years. I have a 4 year old son, Donovan, who is the funniest part of about every day.

I was the Production Manager on" Carol," and the Co-Producer on "Goat." In both roles, I oversee the physical production of the films—making sure the project is on schedule and on budget. "Carol" being a much larger film, I was in charge of the “wheels on the bus”—overseeing the technical departments like grip, electric, camera and transportation, while the amazing line producer Gwen Bialic handled more of the creative overseeing of art and wardrobe. But I got to work directly with some amazing people on that film.

On "Goat," I was directly in charge of the overall film—from the initial budgeting to delivery. We had another fantastic team on that film, and really one of the smoothest shoots I’ve ever had on a project—which was interesting as it was such a hard shoot for the actors. But on any project, it really is a collaboration of all of the people working towards the end product, so "overseeing” something is more coordination than dictating. It’s like being the general contractor for a film.

Also in 2015, I produced the directorial debut of Mariah Carey – the film "A Christmas Melody" that aired on Hallmark as part of their popular Countdown to Christmas. That film also shot in Cincinnati and used many WSU graduates as crew.

What (career-wise) are you most proud of?
I’ve been lucky to be part of many good films, and to have traveled all over the world making films. I am, however, especially proud of the work done in Ohio over the past several years and how the local crew, cast, and vendors have grown and risen to the challenges of the work. WSU grads are a large part of that success. Many of my former classmates now work as department heads in the film industry (in Ohio and beyond), and it is especially rewarding to be able to start WSU students off in the field through internships and then entry-level positions and beyond.

What did you study when you were at Wright State? Any professors that were influential to your work?
I majored in Motion Picture Productions, having transferred into the department from computer engineering early on. I really enjoyed all the classes that were not calculus :)

I continue to draw from the films I was exposed to during my film theory classes—taught by Dr. Charles Derry, Russ Johnson and Dr. William Lafferty. And the core classes for production really shaped my decision to focus on producing.

What would you say to current Wright State students who are interested in a similar profession?
Be prepared for what it means to work as a freelancer. You won’t have a 9:00–5:00 life. You will be largely responsible for your own growth and development, and you will likely have to move more than once to follow the work. There are many things you will have to give up to be able to do this. We do it because we can’t imagine doing anything else.

What does the future hold for you? What’s next?
Just got back from Sundance as "Goat" was in competition this year, and then looking for a film for the spring.