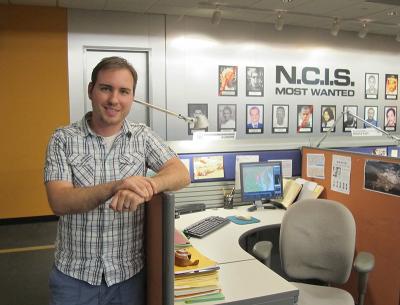 The Office of Alumni Relations recently caught up with alumnus Justin Kilmer, a 2009 graduate of Wright State’s College of Liberal Arts. Kilmer was recently appointed post-production supervisor on the CBS hit show “NCIS” and shares his story of how Wright State has contributed to his success. Kilmer talks about his journey in the entertainment industry and advice for current students with similar career aspirations.

WSU: Tell us about your work history and your current position on the show.

JK: As post-production supervisor on “NCIS,” I oversee the day-to-day operations of the post-production department. That consists of tasks like making sure the editors have all the footage they need, taking care of billing and budgets, and assigning daily work to the post production assistant. Also, if you ever see show clips on “Entertainment Tonight,” “Extra,” or any programs of the sort, I’ve worked with an Editor on those clips and provided them to those shows. The other work that I’ve had a hand in directly is the on-screen placement and pacing of the opening credits.

WSU: What (career-wise) are you most proud of?

JK: Career-wise, I’m most proud of where I am now—slowly making my way up the ranks on one of the most-watched TV shows in the world. It’s also been an extremely unique opportunity because some of the crew has been working together for two decades, starting with “JAG” in 1995, and then moving to “NCIS.” TV shows are very rarely on the air this long; it’s like working with a big family.

I’m also proud of the reality TV work I’ve done because mentioning shows like “Ghost Hunters” or “Celebrity Rehab” usually makes people laugh or at least puts a smile on their faces.

WSU: What did you study when you were at Wright State? Any classes you particularly enjoyed?

JK: At Wright State, I studied mass communication. During my time there, I was working at a TV station duopoly (WKEF/WRGT) and the same for radio (WHKO/WZLR). Both jobs were new to me at the time, so I was especially interested in the classes that helped to understand the work better. Topics like copyright law, distribution of media content to broadcasting networks, and learning how to read Nielsen ratings reports were all right up my alley. Beyond that, I had a lot of fun taking geology, Math and the Modern World, and karate. The Student Union gym was an awesome resource as well.

WSU: Are there any professors that were influential to either your work or your life?

JK: I’ve got to give shout-outs to David Baxter, George Frey, Henry Ruminski, and David Stoneburner. They were all super helpful anytime I needed advice, and their teaching provided a great foundation for the work I do today.

WSU: What would you say to current Wright State students who are interested in a similar profession?

JK: If you’re thinking about a future in entertainment, go for it! It’s challenging, but also can be incredibly rewarding. It’s also not for everyone. I’ve seen many people in L.A. come and go, and that’s fine, but you never know unless you give it a shot. It’s also important to keep in mind that this business is rapidly changing due to technology. New media companies like Netflix and Amazon are disrupting business models that had been in place for most of the 20th century. Consequently, there are more outside-the-box career opportunities than ever, and some of those might be closer to home than they once were.

Also, if you find it tough getting work, you have to stay persistent and make it a point to branch out your job search. I actually owe much of the TV work I’ve done to Craigslist. In 2007, I found a job on there, which ended up being for DIRECTV at the “Country Concert” festival in Ft. Loramie, Ohio. Some of my bosses from that job then invited me to work on “Ghost Hunters,” traveling up and down the east coast. Having worked with an L.A.-based crew, once I moved to the west coast, they hired me again for even more work.

WSU: Tell us about yourself. Kids? Relationships? Travel?

JK: My wife, Janine (Wright State class of 2009, business), and I have lived in California for almost six years. We love to travel and, so far, we’ve gotten to check out Europe and Central America. There are so many more places on the list to see; hopefully it continues on that way! We’ve certainly been blessed so far.

WSU: What does the future hold for you? What’s next?

JK: “What’s next?” is tough to answer. The next step up from my current job is producer. That sounds nice, since there’s definitely a certain aura and prestige that goes along with such a title. At the same time, I have training and experience in sound recording and editing. At the beginning of this year I started a company, simply called Kilmer Media, which sells sound effects to sound designers for TV, movies, websites, etc. So maybe the next, best step is to become a producer that supervises audio for TV and film productions.